Although Barbarians of Lemuria (BoL) just recently released their new crowdfunded Mythic Edition in PDF I didn’t read it yet. I’m waiting for the printed book to arrive. My impression from the beta is mixed: although the new version definitely looks snappier and has lots of additional material the mechanical overhaul doesn’t look like an improvement to me. Nonetheless, the overall package looks sweet and I can always pick and choose what I want to use.
So, while I’m waiting for my book let’s review a supplement for BoL: Swords of Almuric. Of course, it’s still written with the old Mythic Edition in mind but BoL is pretty backwards compatible so it shouldn’t be a problem.

What do you need to know?

Swords of Almuric (SoA) is an adaption of Robert E. Howard’s novel Almuric. I’ve never read the book but as I’m a big fan of BoL I took a gander at this sourcebook in the hopes of getting new material for this awesome game.
You can buy SoA at Onebookshelf (aff) as a PDF for USD $5.99 or as a print in softcover or hardcover for USD $11.98/$13.98. 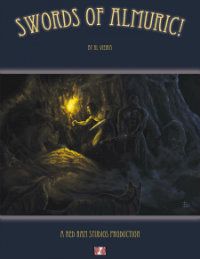 The book is divided into four parts: The Almuric Gazetteer describes the world and the inhabitants of Almuric. The second part, Almuric Expansion, has suggestions for broadening the setting. These two parts of the product are system-agnostic.
The third part is called Playing in Almuric and comes with adaptions for BoL’s rules.
The last part concerns itself about adventures, a bestiary and pregenerated characters.

Let it first be said that the world of Almuric is very interesting if you like the pulpy stuff Howard is known for. At the begining of the 20th century a scientist discovered a way to transport living matter to the planet Almuric. The genre is Planetary Romance and comes with a lot of recognizable tropes. Almuric has the “noble savage”, the Gura, the decadent and long-lived Yaga and their slaves, the Akki. The world is fantastic with sabre-toothed predators, unicorns, thunderbirds and prehistoric plants.

The author acknowledges that it is best to read the novel. That leads me to question the additional value of SoA as a product. Part 1 to 3 roughly outline the setting but it’s way too insufficient to be useful without prior knowledge of Robert E. Howard’s work.

Part 4 deals with scarcely sketched options beyond the novel. These informations fit unto two pages. Some entries refer to the original source and don’t make sense to me: what are the “yellow and red races”?

In the chapter Playing in Almuric the author offers advice for campaign play: during the events in the book, before, after, shortly after or far into the future.

So, perhaps we can find the gems within the system-specific rules for BoL? Mechanically, races are handled with simple bonuses and penalties on attributes. You won’t find boons or flaws. That’s a bit lackluster.
Human characters hailing from Earth do get career backgrounds. They give you a good sense for the early 20th century. Unfortunately, entries are only grouped into categories without further background information. While the idea is laudable its execution is poor.
The chapter ends with a marginal note about firearm rules.

On the positive side, there is a whole chapter with plot hooks and adventure ideas. The Game Master will find lots of material for her campaign.

Chapter 7, Almuric Exploration, contains two pages of tables for random encounters and events. Chapter 8 is the Almuric Bestiary. It’s another set of tables with mutations and modifications for the normal cratures of the core rulebook plus some new original monsters. Like the rest of the book the information content is meager.

SoA closes with some pregens and NPCs. In contrast to the rest of the product the background stories are unnecessarily inflated.

The original cover was strange: too dark with dark fonts, it was difficult to recognize anything. It looks like the author changed the fonts in the preview image which now looks better. However, the PDF still features the old version. The interior illustrations are of good quality and arouse the Sword & Sorcery feeling. The layout is simple and clean with three columns. I really like the used fonts and the border illustrations. For a small press publisher the inside of the supplement looks pretty nice.

All in all, Swords of Almuric is a mixed bag. While it offers access to the world of Almuric you still need to read the novel. Otherwise you’ll get some interesting concepts without meat. The adaption for BoL is uninspiring. As things are now it doesn’t offer any incentive to use it instead of the standard setting. Lemuria is immediately familiar and invites me to get started right away.
Visually, SoA is an appealing indie product (except the cover).
Overall, the information content is too sparse. The product is full of potential but while you can see the spark of something great it fizzles out throughout the book.
In the end, I can justify the purchase of the PDF for the inspiration it offers. The chapter with adventure hooks and the bestiary are neat. Ultimately though, for me it falls short as a standalone supplement for a role-playing game.

Buy this if you already read the novel and want a refresher of the world and some plot hooks & adventure generators.
Don’t buy this if you are not familiar with Robert E. Howard’s Almuric and expect a complete setting sourcebook ready for play.

Beyond the Wall and Other Adventures (Review)