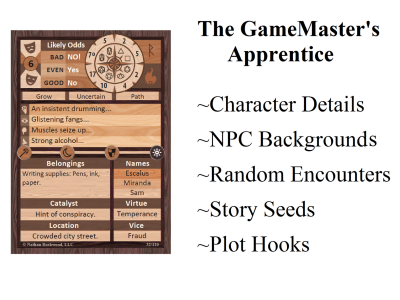 Today I want to playtest one of my recent RPG tool arrivals, The GameMaster's Apprentice. The GMA is a set of 60 poker-sized double printed cards with tons of random generators and at the same time it's a "GM-emulator" which you can use for solo role-playing.
The Kickstarter page has two videos showing how this can work out:

Let's choose a basic game system and character creation system, namely Eight Buddha Palms (German minimalist RPG by Norbert Matausch). I want to make this as minimal as possible, so I can concentrate mostly on the GMA.
I describe the characters with some details. Every character gets 3 "wound levels". NPCs are built similarly but may have more or fewer wound levels.
In conflict, we compare the strengths and weaknesses of the involved parties and make opposed rolls using different size of dice (depending on who's got the advantage).
Let's settle on sci-fi for a setting. I'm enjoying the TV series Killjoys lately, so my game will be loosely based on the setting. I'm playing a bunch of RAC agents (or Killjoys) who do bounty hunting jobs in the Quad.

I'm going to generate characters with the cards, there are suggestions for names, virtues & vices, belongings etc.

Virtue: humility, Vice: sloth
Belongings: scandalous evidence: affair, embezzlement, past life
Sensory Snippets: a beating heart
Futhark Runes: Raido: travel, evolution, moving forward
Random Event Generator: Injure Soul
Ok, so Ryan is humble but can be a lazy bastard. In his former life he embezzled money out of his tech firm on Westerly. He covered his tracks but had to enlist to the RAC. He's a good with mechanics and tech but had to learn how to handle himself in combat. He has a strong determination. Ryan wants to somehow atone for his previous behavior, although he's not ready to face the charges against him. But he will try do do good if he can.

Virtue: temperance, Vice: wrath
Belongings: assassin's weapons: garrote wire, silenced pistol, ceramic knife
Sensory Snippets: a finely-tailored suit
Futhark Runes: Mannaz: Mankind/The Self: The individual, intelligence, forethought, skill, ability; the human race, social order, friends, and enemies
Random Event Generator: Imitate Death
Nell was trained as an assassin (hey, that's cool, that's like Dutch in the series!). She always dresses finely and doesn't necessarily make the impression of a bounty hunter. She's very intelligent and skilled in her trade. Her wrath can be terrible, but normally she holds it in check. She faked her death to escape the organization which trained her. But there might be people around who know who she truly is...

Also generated with the cards using the Catalysts and Locations entries:
Framed! and Graveyard
Sensory Snippets: Lifted off the ground
Style: Elemantal Symbol: Fire = combat
So our Killjoys have to apprehend someone who was framed. Who was it and what kind of warrant is this?
Level of Warrant? Lvl 3, Live Warrant? Yes (using the Odds generator)
Who is this? Chris Perun, a greedy handyman working for the Company, always reeking of diesel exhaust. (again using the cards to create an NPC)

Tension: 3 (this sets the measurement for random events which I set at my own choosing, 3 is low)

Nell and Ryan arrive at one of the graveyards just outside of Old Town in Westerley. They know that their target has escaped there.
As soon as they arrive, the target, Chris Perun, fires off a shot with a strange weapon. The exploding wave lifts the two Killjoys off their feet.

Let's dive into this conflict. The Killjoys are considerably better at handling situations like these and the superior number, but it looks like Chris has got an interesting weapon. He'll get a d6 and the RAC agents get a d10. Using the dice generators on the cards, the Killjoys get a 9 and Chris rolled a 6.

Nell and Ryan recover quickly from the attack. Ryan covers Nell's approach by firing at the target. Nell closes in on Chris and delivers a solid kick to his hide.

Chris lets go of his rifle to defend himself, but he isn't trained in hand-to-hand combat.

But he knows how to fight dirty and throws some dirt and rocks into Nell's face. Momentarily blinded, she can't grab him when he makes a run.

Being on the run from his former employers, Chris's desperation gives him wings and apparently enough luck to dodge Ryan's shots.

Both parties are down to 1 "wound levels", so the next one will decide how it goes: Killjoys: 7 Chris: 6

After wiping the dirt from her eyes, Nell calmly aims with her blaster pistol and waits till she gets a good shot. She hits his left leg and the Killjoys can collect their prey.
Ryan picks off the strange rifle. "Looks like he stole it from the Company. That tech is way above his pay grade."
Chris shouts: "Hey, who are you, folks?"
Nell: "You are being served, we have a warrant for you. Now come back to the ship."
Chris begins his spiel of being framed by his employer and that he's innocent.

The Company has recently lost some revenue due to some bad business decisions. That's why they used one of their black sites to create some advanced weapon technology which they intend to sell on the black market. Chris Perun was one of the mechanics there. However, things went south when the weapon proved unreliable. Chris' boss wanted another one to take the blame and framed him.
While the story is believable, Nell and Ryan aren't sure if this is really all there is to it. They press Chris for further details.

After some stuttering Chris spills it: Yes, it was like he already told them but at the same time Chris also spied on the Company to sell the weapon specs himself. He found himself a buyer but the Company doesn't know who he or she is. That's why they want Chris alive.
"Ok, so why should we help you? You dug your grave yourself." Nell asks. "I'm not happy about the Company producing weapons but it's nothing new that they are scrupulous bastards."
"Well, it's a way to weaken the Company's hold on Westerley." Ryan chimes in. "Isn't such a bad thing."
"But we still need to get paid and we can't let him run. Remember the credo: The warrant is all."
They decide to haul Chris back to the ship.

Tension: 5 (racking up the stakes) Catalyst: Dependent in danger Is it underground thugs from Chris' crime boss connection? Yes (no random event)

Back at the ship the Killjoys discover that the warrant was double-booked! They are greeted by a sweaty tall guy and his partner, an impish looking youngster.

Do they offer to bribe the Killjoys? NO! (extreme result but no random result)

Immediately the thugs train their guns at the Killjoys and their bounty. "We have business with this gentleman. Hand him over." The tall brute barks.
As Ryan and Nell don't have any intention on losing their warrant, this looks like a stand-off. Nell wants to intimidate the thugs into giving up.
"I'm a certified Level 5 RAC Agent. You know that the RAC is no joke. A fight will cost you, guys."

With a sneer the thugs retreat but threaten to come back with backup. Looks like Chris has crossed the underworld boss, too.
Now, the two Killjoys still need to decide how to handle the situation. Chris has enough enemies and they need to complete the warrant. But Ryan still wants to stick it to the Company which rules Westerley with an iron hand.

Nell and Ryan decide that they must deliver Chris to the RAC but they want to help him clear his name. First, they need to know who he sold the plans to.

Oh, crap, Chris dealt with one of the Noble Families on Qresh! It's Abdul Lucia of House Lucia, a fat youngster with brightly streaked hair. He's residing on one of Qresh's resorts. Without it warrant it will be difficult to land on Qresh, the upper part of society is peculiar about their planet.
Undercover work is in order...
Also, they need some dirt on Chris' boss.
Ryan tries to hack the Company's database for info on him.

Difficulty: 6, so slightly above average Hacking is not his specialty, so let's give him a d12 and the security system a d20: Ryan 9, Security System: 6 What does he find out? Tag Symbols: Heart = family, friendship, romance, sun = clarity/revelation, sword: conflict

Chris's boss, Mabon Roman, has some affair with someone in the Company, a woman called Padma Frey. Padma is one of the lead engineers of the project. She had doubts about the weapon manufacturing when she realized the faulty specs. Mabon Roman decided to stick the blame to Chris, although he is not one of the premier researchers. Mabon falsified data, so it looked like Chris sabotaged the project. When Chris realized what happened, he confronted Mabon but to no avail. Still, there is some electronic evidence in the log files of the Company's data system.
Ryan hands this off to Chris. "That doesn't help with your deal with Lucia but at least you can't be held responsible for problems with the weapon."

Does Chris insist on them trying to get him out of trouble for selling the original plans to Lucia? Yes + random event: Regenerate Grudge

"You need to help me with the weapons dealer! Please, I beg you!" Chris pleads. "I know it was false but I really needed the money. It was my chance for getting off Westerley."
Suddenly, the ship's proximity alarm sounds! An attack from another starship!

Lucia's thugs are back and they fire on the ship!

Ryan evades the next blows, does a hard turn and fires back at the starfighter.

But Lucia's thugs don't give up and use their rear canon.

Ryan scans the enemy's ship and lands a hit on one of the vulnerable parts. The starfighter tumbles.

The thugs retaliate with two torpedos!

Both ships are now hit. "Shield capacity is down to 30%!"

The thugs land a lucky shot and Ryan loses control of the ship. The ship spirals towards Westerley...
Okay, let's stop here. Admittedly, my role-playing system was a bit basic. Still, it was a fun ride. I will post the review of the GameMaster's Apprentice tomorrow.