What do you need to know?

Get the free 184 pages PDF here. Print copies are available via Lulu: softcover and hardcover.

Note: this is a reading review. 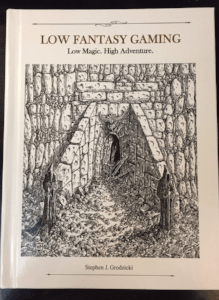 Rolling your stats is generous. One attribute starts with 15. You roll 4d6 and drop the lowest die for the rest. Willpower and Perception replace Wisdom. The rest is standard D&D fare.

You can choose between 5 classes: Barbarian, Bard, Fighter, Rogue and Magic User. No Clerics. The game maxes out at twelfth level. Human-centric, but there are rules for Dwarves and Elves.

LFG uses a Luck attribute instead of Saving Throws. But you need this resource for combat actions, too. And it depletes. A very peculiar mechanic. I can imagine that it can drain fast. And then you lose combat options (so-called Exploits and Rescues). Plus, your ability to withstand adverse effects is also limited.

Let's look at the classes.

Every class has its own gimmicks and abilities. In this way, LFG takes after 5e.

The Fighter gets a special combat ability right from the start. Choose between Charger, Dual Weapons, Opportunist and more. Plus, you crit on a 19 and 20.

Players can look forward to more specialties at each level. Some gimmicks are freeform:


... devise one new ability, trait or theme for your fighter. Feel free to borrow feats, class abilities, perks and so on from other RPGs, modified to suit LFG.

Playing a spellcaster is challenging at best, and frustrating at worst. Low HP, weak weaponry and lackluster spells with a high risk of undesired side effects make the Magic User an unattractive choice at first level.

Why? Magic Missile does 1d4+1 damage at level one. Almost the same as a dagger and less than a bow (1d6). But you have an at least 5% (1 in 20) chance for a nasty effect like reducing your Luck score and *niceties like gaining a tentacle beard. If you escaped your fate, chances increase until you succumb to such a *Dark & Dangerous Magic ("DDM") effect. At least you don't have to roll to hit.

Spells follow the D&D design. The Magic User has a fixed number of spells she can cast. Spellcasting needs concentration, another drawback. I hope that the Magic User gets more powerful at higher levels.

I like the extensive equipment, weapon and armor list. The rules for 19's effects like disarming, dazing or throwing back a foe are not old school, though. Such results normally fall under the umbrella of Referee rulings.

By the way, when you throw a Light Hammer you might knock your target prone, or backward, on a natural 19. Hello, Marvel's Thor!

LFG adds a skill system to the mechanics. Skills grant a minimal bonus. Some actions might not be possible without a skill or background.

And there is a Reroll Pool. If an adventurer fails an attribute check but has a relevant skill, the player can reroll. Unfortunately, you only start with one die in the pool per level. You can restore it with a Short or Long Rest. The skill list includes Deception, Gather Information, Sleight of Hand and more.

As another nod towards more recent games, you can increase party cohesion with party bonds. I like how the entries encourage world-building:

Inquisitors that investigated and expunged the dark Witches of Whitefern.

Guards or Militia patrolling the merchant quarter of Neferai City, when the violent Silk Riots erupted.

You make attribute and Luck checks by rolling d20 equal or under.

The Game Master (GM) can apply modifiers. She can use rules for representative & group checks and degrees of success or failure.

In combat, you have to roll 1d20 + your class level attack bonus + STR modifier for a melee attack. The result must be equal or higher than the target's AC (armor class).

The game offers rules for delay actions, charging, blocking an area, dodging and party retreats. For a successful retreat the party must make a Luck roll and if you succeed, everyone lowers their Luck pool by 1. Might be bad luck for the Magic User who has drained his pool with spell failures. He must remain behind.

Let's look at the original 1974 game. Actions like tripping an enemy or a called shot fall into the realm of Referee's rulings. In D&D 3.5 or 4 you had explicit rules instead. LFG goes a hybrid way. The rules suggest what the players could do and also impose limits.

Major exploits cannot instantly kill or incapacitate a single target unless the target's hit dice are less than the adventurer's level.

I'm wary of the Rescue Exploits. A player can try to intercept an opponent's harmful action to save a friend. Only available when it is not the adventurer's turn, as a reaction. You'll basically get a free action at the cost of a Luck and Dex check (to see if you're fast enough to intervene).

Perhaps this isn't as powerful as it looks in actual play. The player is subject to free attacks if he moves out of melee.

All in all, the GM must take care to track the players' Luck pools. It gives them their options (saves, retreat, Exploits, spellcasting). So it's a delicate balance between draining Luck and them still having enough to do. Otherwise, combat gets boring fast.

At a Short Rest, you make a Willpower check. For each success, you can either recover half of any lost hit points, plus Con bonus. Or recover one use of a class ability or Recover one Reroll Pool die.

No, you don't get Luck points back. You'll need a Long Rest for that. 1d6 days of low key activity.

The section for the GM enlightens us with rules for advancement, a chase system, aerial combat, and more.

Level Ups follow the "new school" credo. Players don't have to loot treasure. Instead, LFG offers two lightweight options. You either level up during downtime or you gain a partial advance for each session. This minimizes bookkeeping.

The chase system sounds like an interesting addition. The chase events make for a varied encounter.

The author, Stephen J. Grodzicki, doesn't leave the GM hanging when it comes to modeling madness in your campaign. He presents a table for madness traits and how madness progresses.

Nicely laid out with a parchment background. Good use of artwork, tables, fonts. On the old school side, so everything is black and white. The PDF gives us digital bookmarks. No hyperlinks. Bonus points for having an index.

All in all, the PDF looks professional.

P.S. Do you want some adventure frameworks to go with LFG? The author has a $1 Adventure Frameworks patreon.

P.P.S. Here is the link to the free PDF again.