What do you do when you want to play Conan or Barsoom with minimal prep?

You want to ax the demi-humans and high magic from your old school D&D game. No ultra rules-lite and no 200 pages rulebook and grid maps either. Familiar gaming style but tailored to Sword & Sorcery.

And you need a quick adventure for an awesome gaming night.

Oh, and make it free. 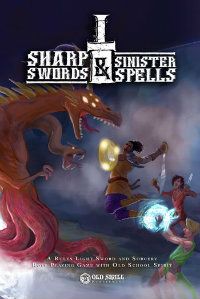 SS&SS is a 50-pages rules-lite OSR/D20 game. It fashions The Black Hack, Whitehack and some ideas from Dungeon Crawl Classics RPG into a Sword & Sorcery BEAST. It's not a strict retro-clone but similar to D&D.

Planarch Codex is full of strange goodness for Dungeon World. And it has a useful article for solo role-players and Game Masters: "Dungeons as Monsters".

Impressions After The Playtest (See Below)

Combat can be deadly.

I like the character creation and the classes. They have interesting special abilities.
The adventure creator is a nice addition for the Game Master.
The rules are simple and robust. I made some mistakes, so take my write-up with a grain of salt.
I couldn't test spellcasting but the rules look like they work. Spells use Power Levels instead of Vancian magic.

Interestingly, characters attack by rolling under Physique (for melee) or Agility (for ranged). Monsters roll over Agility to hit. I wonder how that plays out at higher levels when characters might have an Agility score of > 15.
A monster of the same level as the player character (PC) only hits on a 16-20 (25% chance). The PC has a 75% chance to hit with a ranged weapon (roll of 1-15).
Powerful enemies (HD is higher than the level of the PCs) get a bonus. So it looks like you need to throw mighty monsters at the party.

I'll write a detailed review in the following days. Here is the playtest for now:

P: 10 A: 8 I: 11 W: 131
HD: d10, hp: 5
LD: d6
Complication: Debt: Corrupt Noble
Equipment: Warhammer d8, dagger d4, scale mail (DR: -1d), stuff 2
Combat Superiority: If he doesn’t move, a Warrior can make a number of attacks in a round equal to his level minus the highest HD of the creatures he is engaged in combat with. So, if he is a 5th-level character and is in combat with two 1 HD bandits and a 3 HD crime lord, he can make 2 attacks.
Improved Damage: A Warrior always rolls the damage dice of their attacks improved by 1 step in the following chain: d4, d6, d8, d10, d12, and d20.
Weapon Specialization: A Warrior chooses a type of weapon (swords, axes, bows, polearms, spears, hammers) that he has mastered. When using weapons of that type, they roll a Positive Die with attack rolls.
Improved Maneuvers: Any character can perform combat maneuvers (disarming, tripping, pushing) in place of a normal attack. A Warrior can attack and perform a maneuver at the same time. If the attack is successful, the enemy needs to roll higher than the character’s d20 result to resist.

P: 13 A: 11 I: 15 W: 15
HD: d6, hp: 4
LD: d6
Complication: Duty: Family
95 sc
Equipment: short sword d4, short bow d6, stuff, light leather armor (DR: -1)
Sense Magic: A Magic User can make an Intellect test to detect the presence of magic in their surroundings.
Spellcasting: A Magic User can cast spells making a Willpower test according to the Spellcasting rules described later.
Blood Sacrifice: A Magic User can sacrifice points of Physique or Agility to temporarily add the same amount of points to their Willpower to cast a spell. These points are healed as normal.
Spells Known: A Magic User begins knowing 3 spells and learns an additional spell each time they level up. The max number of spells a Magic User can know is equal to his Intellect. To learn a spell, the Magic User must make an Intellect test. If he fails, he may try again when he gains another level.

SS&SS has a simple adventure generator, here is the result:

So, in the first room, there'll be a strong twist, strong mirages, and the rivals might also make an appearance.

GM: You've opened the magically sealed entrance with the key you found in one of your previous adventures. The first two levels of the tower were disappointing: full of rubble and dust, no treasures to be found.
The ruins have a strange quality to them: the interior of the tower is bigger than the outside dimensions would suggest. Sometimes corridors bend in weird ways and doors pop up where it shouldn't be possible.

You have ventured into the third floor and opened up the door to a large room. Fey lanterns light up with a green hue. As you cautiously step into the unknown, your stomach twists and you have the strange feeling that reality bends. It snaps back but the hallway where you have come from is gone.

The room has a staircase leading up. There are three stone pillars with ancient statues etched into them. It smells like a cold winter night here. One door at the opposite site and one door at the right, both closed at the moment.

Suddenly, the lanterns flicker and the light grows brighter and brighter until the room is bathed in an unearthly green blaze in some parts and dark pockets of shadow in other parts.

Dark specters come alive and float into your direction.

[I need some monsters and a specter is not included in the ruleset for SS&SS. I'll use the BX Monster Reference (aff, USD $2.00) and adapt it. Specters are pretty powerful, I will scale them down.
Specter: #Enc. 3, HD 2, dmg 1d6+2, drains life
The +2 is from the "Dangers?" section, the twist has a strong presence.]

[HD determines the order of combat. The Specters are HD 3, characters are level 1/HD 1, so the specters go first.]3

The specters close on you and shadowy fingers grasp you. Both Shelayna and Brock can evade but one specter grapples Athelas and brings him down. It drains the life out of the Wizard and is unconscious.

Brock swings his Warhammer and smashes against the specter. The impact throws it back into the path of Shelayna who now has an opening.

GM: The injured specter dashes back to one of the fey lanterns and gains in mass and density. Two specters are lunging at the characters while Athelas lies lifeless on the ground.

The shadowy figures corner you. Brock's armor deflects an attack but one specter's arm drains the life out of Shelayna. She manages to stick it out, gasping.

Players: ..but she is too winded to hit it with her ax.

[Not looking good for the adventurers. In true OSR-style Sharp Swords & Sinister Spells is deadly for low-level characters.]

GM: It looks like the injured specter has recharged itself. And now that you think about it, the shadows got sharper and more defined when the fey lanterns went ablaze. Athelas is still knocked out cold and Shelayna is wheezing from her wounds.
Brock is the only one who is still unhurt but his Warhammer wasn't very effective yet.

[Let's see if the adventurers realize that the specters will disappear if the light goes away.
Shelayna: 1d20+2 = 12 - success]

Players: Shelayna: "Brock, we need to snuff the light out!"

GM: But first, both of you have to defend yourselves against the ghostlike beings.

Two specters circle Brock [both miss] and one tries to drain the life out of Shelayna and ... [hit, dmg 5] succeeds. With a sigh, her eyes roll back and she falls down on the ground like a bag of bones.

[Does Brock have something with him to zap out the fey lanterns? They are magic, so a normal blanket wouldn't be enough. Luck roll = 4. Spell failure? 1d20 = 17 - no]

Players: Brock doesn't have time to mourn his comrades. He pulls out the magic wand they looted in a previous adventure and snuffs out the lights.

GM: Yes, it magically extinguishes all sources of light.

GM: Looks like the specters have drained them completely. And now Brock hears voices coming from one of the doors. Familiar voices - it's Agog's company, their rivals....

P.S. Did you grab the free PDFs?

Warning: What I am up To